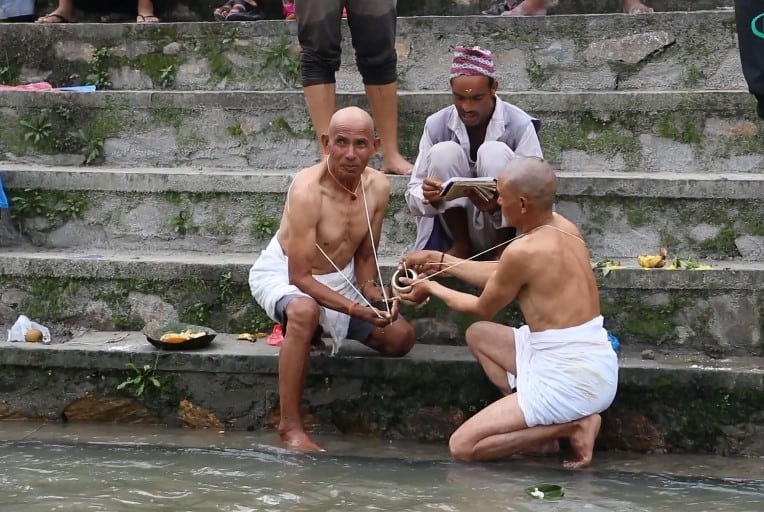 Father’s day in Nepal is on Bhadra 03 2077 Whereas it is on August 19, 2020. Every Hindu people celebrate Kushe Aunsi to show deep respect and gratitude to their father and their ancestor. Kushe Aunsi is the day dedicated to the father to show him deep respect and gratitude for what he has done for us. Although the respect to the father and ancestor for one day only is not enough, this day memorize us to show them deep respect, worship them, and cheerful.

In Hindu mythology, it is believed that on the tip, middle, and root of the Kush grass Lord Mahadev, Lord Vishnu, and Lord Bhramha reside respectively.

So, as a whole, Kush grass significantly uses rituals for their deceased father and ancestor on this day for the peace of their departed soul in heaven. So, this day is also called ‘Kushe Aunsi.’

CELEBRATED BY: Hindu people
CELEBRATED AT: All over Nepal
RITUALS PERFORMED:

On this day, the father is the center of attention from all family members. Hindu people who do not have their father, visit the various sacred place to perform rituals called ‘Shraddha’ for their deceased father and ancestor on this occasion.

In Hindu mythology, it is believed that performing ‘Shraddha’ on the sacred place of Uttar Gaya (sacred place developed from demon Gayasur), departed soul of dead father and ancestor can easily rest in peace in heaven.

For people who have their father alive, make offerings to their father, and keep him happy. People came from afar place to meet their father and to show him deep respect and gratitude.

How do Celebrate Fathers Day in Nepal?

Son/Daughter buys new clothes, provide delicious food to their father on this day. They go to a sacred place and their father to pray god for the longevity of their father’s life. They do their best to make their father happy and satisfied. Tehen they listen to the experience of their father and learn a lesson from it. And they show love to their father in every possible way they can. So, the whole environment surrounds with love, satisfaction, and happiness.

Small children buy fruits, sweets as delicious food, and ‘Dhaka Topi’ watches to wear for their father if they can afford it. They also try to make their father happy in every possible way. Learning to respect elders by children is always a good thing, and this day helps them respect the elders through practical learning, which is quite positive.

Likewise, on this day, people kept Kush grass in their house brought by their Gurus. As earlier stated, people want to keep Kush in the house as Lord Brahma, Vishnu, and Maheshwar reside on it. So, keeping Kush on the house brings good fortune to the house.

Hence, Kushe Aunsi is celebrated to show deep respect, love, and gratitude to their father for his sacrifice to us. This occasion helps to create a bond between the children and their father, even stronger and warm. We should make our father happy in every step of our life because, as like the mother, we also cannot get father twice in our life.