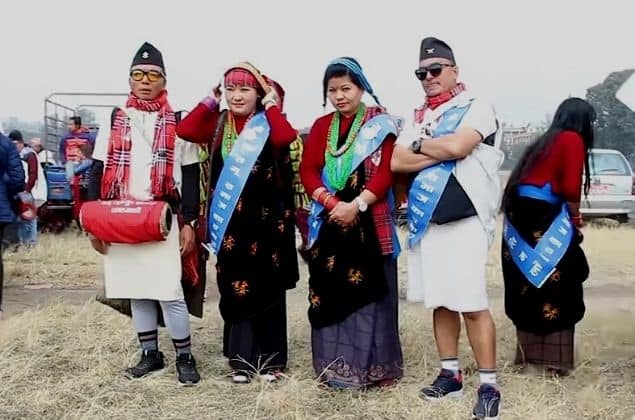 Tamu Losar: Gurung Festival is on Poush 15, 2077 Whereas it is on December 30, 2020. In Nepal there are various types of Losar celebrated such as Sonam Losar, Tamu Losar, and Gyalpo Losar. Among them, this is the most celebrated festival of Gurungs society is Tamu Losar.

In Nepal, most of the Gurungs are in the western region (Kaski, Syanga, Parbat) with their own dialect, and also some are also residing in eastern parts of Nepal with dialect almost similar to the Nepali language. So, it is celebrated all over Nepal by Gurung communities outside and also by the Gurungs outside Nepal.

What is Tamu Losar

In Tamu Losar, “Tamu” means another name of Gurung, whereas Losar is composed of two words “Lo” means year and “sar” means new. So, Tamu Losar is actually the beginning of another Gurung Sambat.

Nowadays, people of other communities and many tourists are also attracted to celebrate Tamu Losar because of its own uniqueness and due to hospitality shown by the Gurung people. It is celebrated every year on 15th Poush, according to the Nepali calendar.

Many Gurung youngsters are also keen to learn about their origin, festivals, dresses, and many other aspects that are quite positive. Gurungs residing outside Nepal are also celebrating their festive in a typical way. The people who are curious to learn about the Gurung community and there festive are growing day by day.

What is the Meaning Of Gurungs

The Gurungs originated some eight or nine thousand years ago in Mongolia and Western China. They brought their traditional priest with them, and there they are known as Tamu (Tubo) by 1000 B.C.

There is another belief that Gurung is actually derived from two words “Guru” means priest and “anga” means angarakshyak. So, the word Guru and anga combined and later called Gurung, which actually means the bodyguard of their priest.

On the day of Losar, the family members and relatives are gathered together, visit Gumbas, worship their priest, take blessing from the priest and eat delicious food. On this day, Gurung people wear their own typical dress and perform their own dance.

Rodhi is also performed between males and females, which is the most interesting among youngsters as well as elders. Rallies are also performed at various places in Nepal. The different programs were also conducted at Tudhikhel, Kathmandu.

Male used to wear kachad, feta, and vangra whereas females used to wear ghalek, guniyo-cholo, patuki, and Pachauri along with beautiful jewelry. As a part of food generally, sel-roti, achar, and chicken curry with hard drinks and soft drinks are typical.

Nepalese Gurung community girl wearing traditional dress looks on as she takes part in a event to mark their New Year known as ‘Tamu Losar’ in Kathmandu, Nepal, on December 30, 2020. The Native Gurungs, also known as Tamu, are celebrating the monkey’s year’s advent.

These all clan celebrate Losar and specifically celebrate with the same meaning. On the occasion of Tamu Losar, Barga(Loh) shifted from one to another.

Read also: Do you like to know how to celebrate Rakshya bandan in Nepal?

What are the 12 Bagra Name

There are twelve Barga namely rat, cow, tiger, cat, eagle, snake, horse, sheep, monkey, bird, dog, and deer. Each Gurungs have their own Barga and comes once in the twelve years. They performed favorable work, according to Barga.

Hence, in general, Tamu Losar is celebrated by worshipping the priest, getting blessings from priests enjoying with family members, relatives, eating delicious food, performing a dance, and singing song.

Search Jobs Near You