How to Celebrates Raksha Bandhan in Nepal (2021) 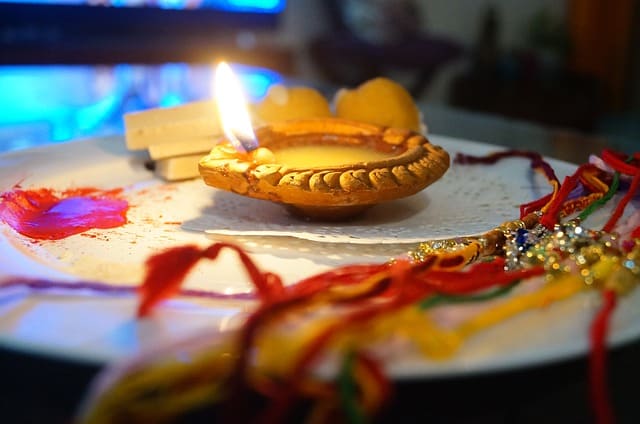 Raksha Bandhan in Nepal – The festival of Janai Purnima is also known as “Rishi Tarpani” and ‘Rakshya Bandhan’. It falls on the full moon day of Sharwan. This is the day when the male members of Brahman and Chhhetry family and those who put on a sacred thread called Janai, after the Upanayana ceremony, change their Janai for the year.

What do we do on Raksha Bandhan?

Early in the morning they take a bath in the nearest river, pond, or stone-tap and receive a new Janai from their priest. They also tie a yellow thread called ‘yagyopabit’ on their right wrist which is given by the priest, sister’s son or son-in-law.

The priest, nephew or son in low, is given money in return. Together they eat delicious food. There is a practice of taking a special soup called ‘Kwati’ which is made from nine different varieties of seeds.

What happens in Raksha Bandhan?

Many people go to take a bath in Gosainkunda at Rasuwa district and Manichud and Sindhupalchowk district. At Kumbheswor in Patan, a big fair (Mela) is held on this day. Janai Purnima is a festival of male members. Brahman and Chhetry change their Janai and other people take ‘Rakshya Bandhan’ from priests.

In the Newar community, there is a practice of feeding the frogs on this day. So it is said that in ancient time a demon called ‘Ghantasur’ or ‘Ghantakarna’ planned to enter into Nepal valley and kill all the people. And the frogs made the people aware of the plan of Ghantakarna, the previous day of the full moon day of Sharwan.

In this way, the festival of Janai Purnima or Rakshya Bandhan is celebrated for various reasons by the people of our country (Nepal). There are different ways of celebrating it.

On the whole, it represents our culture, religion, and social practices. Whatever way we may follow to celebrate it, it is our traditional festival and we should keep up such things to preserve our culture for future generations.